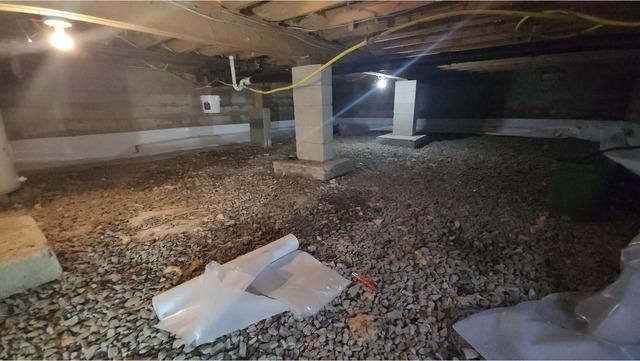 This homeowner called Foamco because their home was freezing during the winter and their utility bills were extremely high. For the longest time they could not figure out what the cause was. That was until they said enough is enough and decided to reach out to us.

Upon our inspection of their crawl space, we realized that there were two reasons why their home was cold and their bills were so high. The culprit was that they had exposed walls and an exposed gravel floor. The other culprit was that their rim joist and sill plate had a decent size gap. Because of these two issues, cold air could penetrate their crawl space and travel upstairs due to the stack effect.

To resolve the issues, we sprayed two inches of closed-cell spray foam on the crawl space walls, rim joist, and sill plate. By applying two inches of spray foam we achieved an R-value of fourteen. Once completed, we encapsulated the crawl space with our CleanSpace vapor barrier. Our vapor barrier will not only keep their home warm in conjunction with their spray foam, but will also brighten the space and make it more comfortable to crawl around.

Since completing this project the homeowners have noticed a tremendous increase in the comfort levels of their home and a reduction in their utility bills. They wish that they had completed this project sooner than later so they could start to reap the rewards sooner. They could not have been any more pleased with how their project turned out.

View All Before and After Photos

We serve the following areas